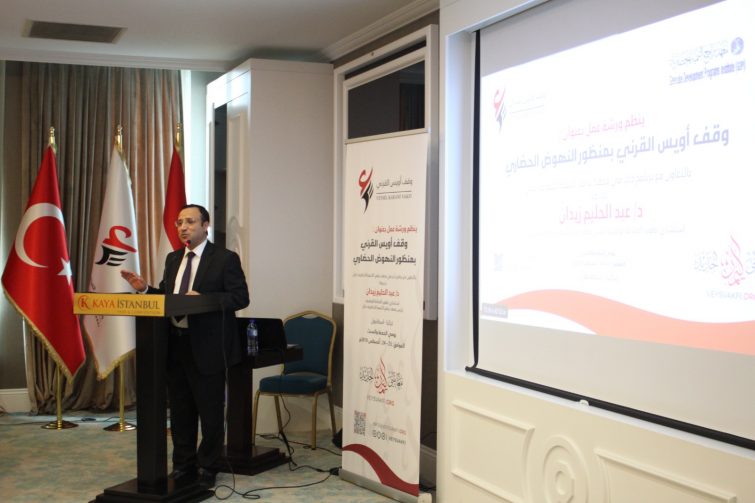 In the presence of Dr. Mohammed Al-Adeel, the Deputy Minister of Expatriates Affairs and a group of the financial and media experts, Owais Al-Qarni Waqf organized a workshop entitled “Owais Al-Qarni Waqf in the perspective of the civilizational advancement” during the period from 23 to 24 August 2019 in cooperation with the Dhikr Program at the Institute of Urban Development Programs in Lebanon which is managed by Dr. Abdel Halim Zidan, the Consultant of Development of Waqf Industry.

The workshop started with a speech by Mr. Salah Bates, the head of Waqf. He welcomed the attendees and presented the idea, steps of establishment and the legal phases of the Waqf until it became a real thing known by a lot of people. Bates said that the Waqf was a participatory qualitative initiative for every Yemeni and Yemen lover. The paths of the Waqf program lied in three broad lines of building the human being through caring for the superior, talented

and distinguished persons for preparing them to be the leaders of the future and contributing to the preparation of good governance through the development of the performance of the governmental and private institutions. The contribution to reframing the public opinion in a way that enhances the national identity, the spread of the culture of coexistence, the respect of diversity, the acceptance of the others and the achievement of the lasting peace for building the new Yemen that can accommodate all its citizens was one of the three important paths. Regarding the support and the mechanisms for receiving contributions, Bates pointed out that the Waqf considered the donor as a contributing partner whether through the financial shares or endowments and the contributor’s donation was maintained and registered according to an accurate accounting system.

Dr. Zidan, the keynote speaker at the workshop, praised the idea of Waqf and its programs and he considered it as a building block towards the civilizational construction based on the historical background of the Yemeni people and their available opportunities. He pointed out that the right economic orientation was concerned with the human element more than the financial revenue because the human being was the important element in the economy whether it was cognitive, intellectual or material. This was what the Waqf should be based on.

In his brief speech, Dr. Al-Adeel, the Deputy Minister of Expatriates Affairs, said that the Waqf was a great and ambitious project and all of us should contribute to its success. He added that they were proud that it was one of the national projects that was developed and launched by the Yemeni expatriates. A Yemeni citizen presented and still present a model of success and donorship in the phases and places of their expatriation. Those who were in charge of that Waqf should have exerted great efforts to strengthen the basis of its construction by benefiting from the efficient experts and providing it with the professional cadres and activate the national partnerships and the expertise houses and the continuation of the process of training and qualification. He also said that he was happy to attend that workshop led by Dr. Abdul Halim Zidan, the endowment expert and the pioneer in that rare specialization and he thanked those who were in charge of

that Waqf for what they heard and saw that made them happy.

Over the two days, the workshop was enriched by the effective interventions and suggestions made by the attendees on the development of the Waqf and the activation of its mechanisms. These suggestions were written down and a committee was formed in order to study them and make recommendations that would be submitted to the Waqf administration for approval. At the end of the workshop, commemorative shields and certificates of participation were distributed on the attendees