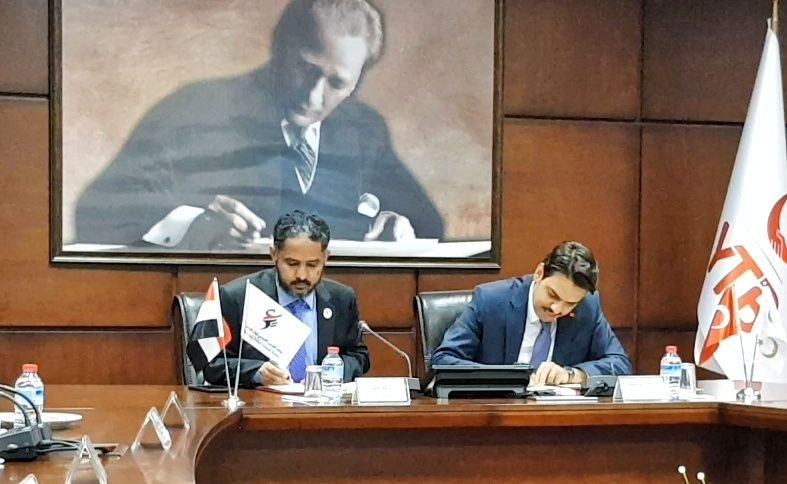 A ceremony was held today, 2nd October 2018, for signing a cooperation and understanding protocol between the Turkish Scholarships Authority (YTB)  and Owis Qarni Foundation For Yemen.

On the sidelines of the signing ceremony, the head of the Turkish Scholarships, Mr. Abdullah Aran, gave a speech for welcoming the delegation of the Foundation. He stressed the ties of brotherhood and cooperation between the two brotherly countries. He also expressed his admiration of Yemen’s Pioneers Program (Kafaat) pointing out that the specializations of the Program can meet the needs of Yemen. He added that the Program has the support and interest of the YTB. He also wished all the excellence and success for both the Foundation and the Program.

On his part, the chairman of Owis Qarni Foundation, Salah Batis thanked the leadership and people of the Republic of Turkey for their stable positions that support the legitimacy in Yemen and its people who look forward to development and prosperity. He discussed the phases of the Yemen Pioneers Program (Kafaat). He thanked the Turkish Scholarships Authority for the cooperation to make the Program successful and their contribution to its budget. He asked the concerned bodies and businessmen to cooperate with Owis Qarni Foundation for covering the rest of the costs of the Program because it is considered a unique initiative within the programs of the Foundation. The Program will is apart from the online Turkish scholarships and the cultural exchange scholarships, and the Program will be implemented in the next academic year (2019-2020).

It is worth mentioning that Yemen Pioneers Program has great attention from both parties and it will have a great impact on the present and future of Yemen for preparing the future pioneers from the distinct male and female students who meet the criteria of the Program.

Both of Salaheddin Al-Qayadi, the Executive Director of the Foundation, and Toline Sharifa, the Director of the Office of the Executive Director, attended the signing ceremony representing Owis Foundation. From the part of YTB, Sayed Yusuf, the Vice President, Morad Kazanji, Head of Cultural Affairs and Social Relations Department, Ahmad Attabash, Head of the Department of World’s Students, Nadim Aslan, Coordinator of the Middle East and both of Mrs. Sveng Abru Taleel and Mrs. Girin Ardal attended the signing ceremony, too.